Struck by the devastation caused in Long Beach in the wake of Superstorm Sandy, 9-year-old Tyler Fazzari of Port Washington did something not many children his age would do. In lieu of birthday presents, he asked his friends to donate money to help Long Beach Public Schools. His goal was to raise enough money to buy East Elementary School a new Smart Board. Tyler also received support from family members, who contacted Smart to let them know about Tyler’s ambitious plan. Smart put Tyler in touch with Teq, its regional sales representative in Huntington Station. Representatives at Teq were so impressed with Tyler’s selfless efforts that they agreed to donate a Smart Board, along with a Smart Document Camera and Smart Slate.

“The school got flooded and they needed to rebuild,” said Tyler when he was asked what motivated him to embark on this lofty endeavor. “I feel good that they got everything back.”

“When Tyler’s family told us what he was doing, we were happy to get involved,” added Damian Scarfo, chief executive officer of Teq.

Tyler and his family made a special trip to East Elementary School on May 14 to see the equipment in use in the school’s computer lab and to meet the children who will be benefiting from his generosity. Principal Sean Murray presented Tyler with a giant thank-you card signed by every student in the school. He also gave Tyler the honor of being the first to activate the Smart Board. After the ceremony, Mr. Murray took Tyler on a tour of the building and brought him to meet all his fellow third-graders at East School, who were duly impressed with Tyler’s kindness and resourcefulness.

“We are extremely grateful to Tyler for his efforts to aid in our recovery,” said Mr. Murray. “We are hoping that someday our students will be able to pay it forward.” 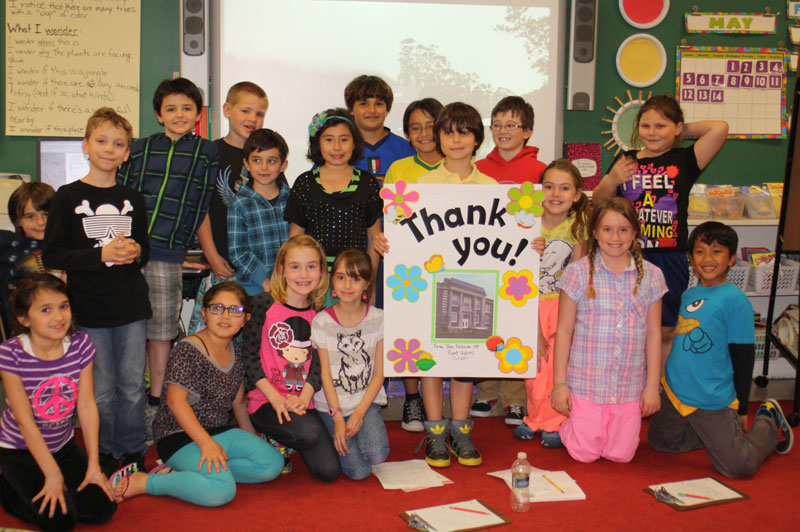